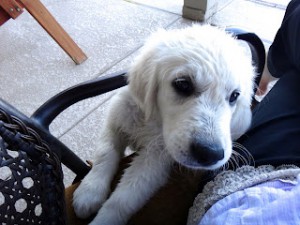 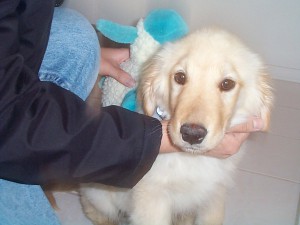 I was sitting in the kitchen sink getting a bath. It was so humiliating getting a bath. Every time mama and daddy looked over, I kept saying “don’t look at me!” I was four months at the time but I was still living with my breeder. Mama and daddy were visiting to see if they wanted to adopt me.

The rest of my litter had already been adopted. Purple girl and I were the last remaining pups. Purple girl already had a home but her owners just didn’t pick up her yet. So I was the last golden that needed a home.

At the time, we didn’t have names. Instead, my breeder tied different color ribbons around our necks and called us by the color of our ribbons. I overheard her telling mama that she didn’t want to give us names otherwise she would get too attached.

When I was six weeks old, my breeder fed us a different brand of dog food. She ran out of the good stuff. Crunched for time, she purchased a bag of discount dog food at a nearby supermarket. The new brand was not very tasty (it probably wasn’t very healthy either). I don’t know how my litter mates ate it — bunch of savages. White boy, who was my best friend at the time, didn’t like it either so we decided that we weren’t going to eat the new dog food. Instead, we just wrestled and bit each others ankles.

We didn’t eat for a whole week.  I would like to make a couple of observations. First, puppies can starve themselves to death when they have better things to do than eating non-tasty food so please make sure that your puppy is eating. Second, always make sure that you have dog food in the house. Finally, OMG – looking back, I can’t believe that I didn’t eat for a whole week . 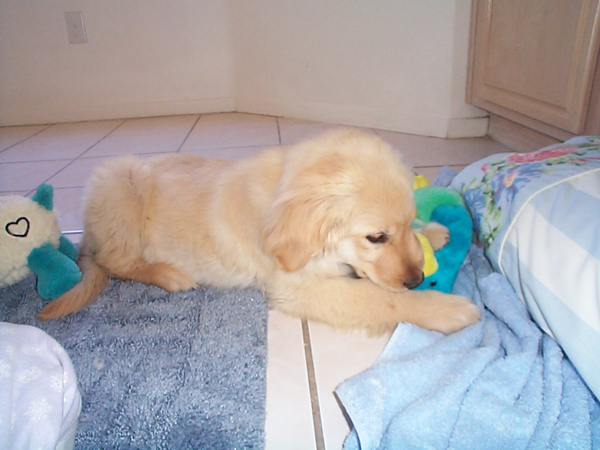 When my breeder realized that White boy and I weren’t eating, she took us into the house. We lived inside the house for two months. During that period, White boy and I continued to wrestle and bite each others ankles while our litter mates got adopted. I don’t really miss my litter mates — mama and daddy never got a chance to meet them. Plus I got to stay in the house with White boy, the humans,  and their four cats.

I enjoyed playing with the cats. I was sixteen pounds at the time and some of the cats weighed more than me. I remember distinctly that I drank from their water bowl and ran away when they hissed at me. It was a fun game.

Question:  What is the best way to get my golden retriever  to greet people calmly ? 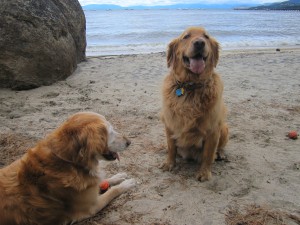 He needs a very strong “sit-stay” for this. Basically you put him on a sit-stay and do NOT allow anyone to pet him unless he is in the sitting position. The petting becomes the reward. You will need to work with some friends that have the patience to wait until he “gets it” the first few times. Just keep saying “sit” very firmly, then after he is sitting say “stay”. Then allow your friend to take a few steps toward him. As soon as he breaks the sit, the friend must step backwards 2-3 steps. So every time he breaks the sit, the person he is so eager to meet moves farther away. As long as he stays sitting, the friend may advance, s-l-o-w-l-y, 2-3 steps at a time, until they are right in front of him. Then say “stay” again, and allow the friend to pet him and everyone tell him what a wonderful boy he is. <Grin>

Training Tuesdays is a new section on goldens.com. Every Tuesday, I will post a new training tip.

In the beginning, they are mostly tips that I have accumulated. As time passes, it is my intentions that we will take questions from readers. 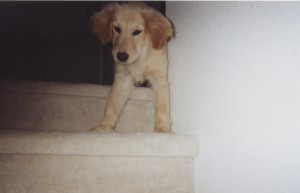 As I was saying, I was getting ready to eat breakfast in the kitchen. I had a big smile on my face. My tail was wagging and I was heeling next to mama even though they didn’t even teach me the heel command yet.

At the time, Daddy didn’t want to teach me the heel command because he said, “dogs don’t heel in nature because it’s too vulnerable. One bullet would take out both of us.” Of course, daddy doesn’t have any military training. Instead, at most, daddy’s qualifications consist solely of being Chinese and having read the Art of War by Sun Tzu twice.  Moreover, I highly doubt that someone would shoot at a golden retriever. 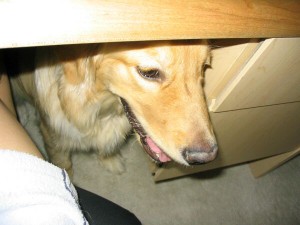 Mama was wearing a pair of pastel blue terry cloth shorts – very chewable material. I don’t remember what mama’s top looked like. Mama had a red hoodie that she wore all the time and if I had to guess, that would be what she was wearing. Daddy use to joke about how we could never figure out what year a photo was taken because mama always wore the same red hoodie. Of course, I wanted to be just like mama, so I wore the same blue collar, except they just got bigger as I got older.

Lately, our morning routine consists of me looking at mama with my big bright eyes and then biting her shorts. Mama would make a big fuss about it and praise me in a loud and excited voice.

This morning, however, something different happened. As I was getting ready to bite mama’s shorts, mama grabbed my mouth shut and said “NO BITE.”

Immediately, I gave a whimper, my tail went between my legs, and I ran into the kitchen. I don’t remember if I ate breakfast that morning, which is a big deal because I love breakfast. I do remember that I didn’t look mama and daddy in the eye for the whole day.  Mama and daddy wanted to play ball with me but I wanted no part of it. Mama and daddy thought I would get over it but I was still mad even at bed time.

I remember mama telling me to not go to bed angry. I pretended that I didn’t hear mama.  I kept staring at the wall. It was then that mama and daddy knew that you were a sensitive boy. We will use a different technique to train you.

> P- seem to have developed a problem of biting his mama’s shorts in the
morning. His tail would wag and he looks so happy when he does it. I’m not
sure if mama thought it was funny at first but now she wants him to stop.
I tried teaching him the off command by giving him a treat but it didn’t
seem to work. I can’t grab his attention… do you have any advice ?

This is a common phase for Goldens to go through about now. I have reports from other littermate owners saying their pups are really getting rowdy all of a sudden.

Mama needs to grab him over the top of his muzzle with one hand and squeeze his lips against his own teeth HARD while saying “NO BITE!” Half measures will not work here. She must be quick, hard, and loud. If it doesn’t work, she isn’t squeezing hard enough. If done correctly he should let go right away, then she can give him a toy to have in his mouth instead of her shorts! 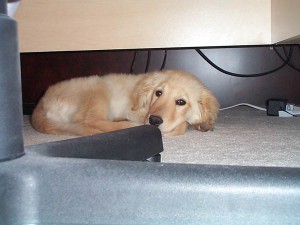 Do you remember sleeping under mama and daddy’s desk when you were just a pup?

I think you were only five months at the time.

You would sleep under mama’s desk while she worked. When you woke up from your nap, you would wait quietly under the desk until mama and daddy finished working so you can play with them.

Of course, mama and daddy took lots of breaks and no work really got done for the first couple of weeks. 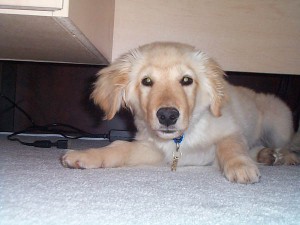 As you got bigger, you still slept under the desks but you took less naps. Furthermore, you would no longer wait quietly until mama and daddy finished working. Instead, you would play with your squeaky toys and you would make constant squeaky sounds until you got mama’s attention.

Later, the boredom really got to you and you started stretching against the desks. You would roll on your back and kick your tiny little legs against the desks. Mama and daddy would yell at you because you would scratch up the desks but you didn’t care because you got their attention. You knew that you just had to smile and then mama and daddy would stop working and play with you.

Did you know that when you started teething, mama and daddy would secretly peek under the desk to make sure that you were not chewing on the power cords?